Killing Eve Season 3 - worth the wait? 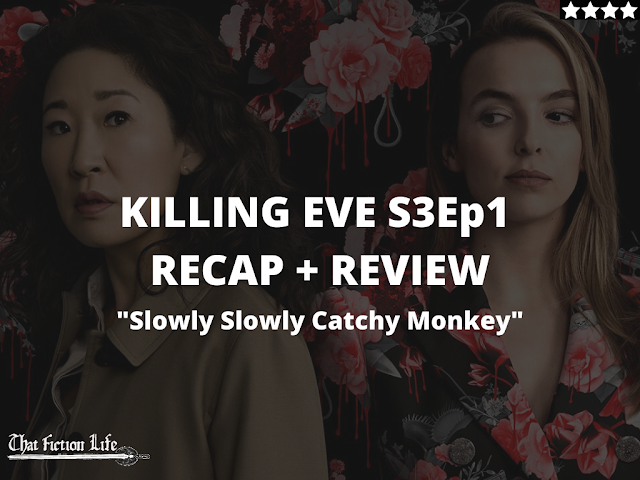 When the Sandra Oh and Jodie Comer led crime thriller Killing Eve first premiered in 2018, it entranced viewers with its intricate, raw storytelling and irreverent characters. Now Season 3 has arrived, proving to be as captivating as ever albeit arguably showing our characters leading more mundane lives. Eve works at a restaurant, Kenny is a journalist, Carolyn is under the watchful eye of her superiors and the biggest bombshell? Villanelle has gotten married.

With a new showrunner taking on the devious dark comedy, audiences were wondering whether the show would follow the same structure as the previous seasons and now it has become apparent that the focus will lay on solving a murder, straying from the usual cat and mouse storyline that began each preceding season.

The majority of the episode acts as a scene setter, which is to be expected given that time has passed between the season 2 finale and present-day but it didn't capture my attention all that well. The highlight was seeing Eve appearing very content in her new life, concentrating on her Korean heritage which was a great way to get to know the character better but everyone else' introductions were lacklustre in comparison. I would go as far as to say that Villanelle's role (notwithstanding that epic first scene of course) was undervalued in this episode. Jodie Comer is a delight to watch on this series and this episode didn't utilise that; I look forward to those creepy manipulating glances yet they were scarce.

That final scene brought it all back though, hence the high rating, as it was a surprise I presume not a lot of viewers would have seen coming. Kenny was perhaps the only pure character left so his ending is particularly emotional. I am very grateful for the casual hang-out scene with Eve as their dynamic was one of the best on the show and I suppose his demise is quite literally the only thing to convince Eve to return to her old life.

It seems everyone has a fresh start but this episode has left a lot of loose threads for this season to explore, why has Konstantin not visited his family yet? Where has Villanelles' out of the blue marriage come from? I am also sort of curious to see the outcome of Hugo's lawsuit against the agency for his injuries last season, given that MI6 covered up everything that happened in Rome but I doubt we'll hear about this again.

Eve and Villanelle's chemistry is what makes the show and so I never particularly enjoy the first few episodes when they are apart. This was in no way a bad episode to introduce the season, in fact by the end it was clever and engaging but I can't be the only one wondering how our favourite duo will be reunited and what will prompt the overlap of their lives once more.