The Queen of Nothing theories 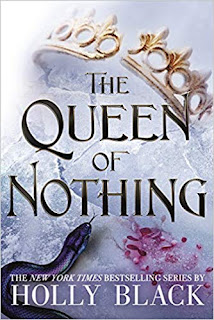 As the publication of the third and final book in the Folk of the Air trilogy looms near, it is time to let some of my theories into the void of the internet. The Queen of Nothing, based on where the series is heading, is promising to be a whirlwind of betrayals and angst and I for one am ready for Holly's patented scream out loud writing. This is also the perfect opportunity to mention that if you're in the UK and you pre-order the book before 23.59 on the 18th November 2019 and send proof of purchase to marketing@hotkeybooks.com, you will be sent a special Cruel Prince pin and bookmark (full details and T&C's here).

MAJOR SPOILERS FOR THE CRUEL PRINCE AND THE WICKED KING

Don't keep reading if you haven't read The Wicked King!

Not a theory per se but a lot of readers have said that since Jude is technically the Queen of Elfhame and only the crown can pardon her, she can simply walk back into Faerie with no consequences. But I believe Holly Black meant for this to be literal. Only the real Blood Crown can pardon her and since a new one is supposedly being forged, whoever will be in possession of it is the only one that can pardon her as well as High King Cardan.

I have absolutely no evidence to support this statement but I feel as though we are being tricked into loving Cardan despite his psychopathic tendencies just to see him perish at the hands of Jude.

3. Jude's heritage is a lie

Ever since Jude's mum said that Jude is 'Nobody's daughter' in The Cruel Prince, I have had a feeling that there has to be more to the twins' origins.

4. Jude will turn to the dark side

I have long thought this series is a villain origin story and I can genuinely imagine Jude totally losing it (maybe due to theory #2?) and burning all of Elfhane. Then the series ends on a cliffhanger and in the epilogue she’ll be picking up the ashes of everything that perished around her. Wow that turned dark.

My last theory stems from information we were told in an extract of the Queen of Nothing SO DON'T READ ON if you don't want to know what it said.

(Check out the extract here)

Taryn is up to something, isn't she? I can't imagine her fight Locke let alone kill him so I feel as though this is a scheme to get Jude back into Elfhame to violate the terms of her exile. I'm imagining Locke and Taryn secretly plotting behind everyone's back to make a grand entrance as the final villains that need defeating.

I have read Queen of Nothing!! If you’ve also been blessed and managed to read it, check out my reading vlog below.