Arc of a Scythe: A satisfying conclusion? | The Toll review 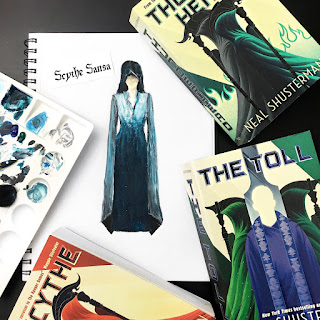 Neal Shusterman is a one of a kind writer, whose words have completely struck me ever since starting to read his works. Scythe was a standout publication and a stellar addition to the YA genre, so when I had the chance to interview its genius creator over coffee last year, I revelled in finding out just what goes on in the mind of such a skilful author. Not only that but having Neal on my channel to talk about the series further (if not in a more casual way, I mean we did sort the characters into Hogwarts houses), was an experience I'll never forget. The way he articulates his ideas across is second to none; the passion for writing shadows every word written.

The Arc of a Scythe trilogy perfectly captures how although humanity thinks it has conquered absolutely everything except death, it is not as easy as it sounds and even the most compassionate of professions (scythes control the population by 'gleaning'), can have corruption within it. The constant battle of morality throughout the series makes it very reflective and it challenges just how humanity can function in a utopian setting, and how complications can still arise. These ideals are further challenged in the Toll as our characters are presented with a very different landscape to that of the previous two books.

The finale took me by surprise, having gotten used to a more utopian setting where a perfect system is only slowly falling apart, the Toll adopts a more dystopian approach. There are philosophical undertones, which are much more blatant and focus heavily on social and political issues.

Mild spoilers from Scythe and Thunderhead will appear in the remainder of this post.

The array of new characters were a strong addition to this book. We meet a genderfluid captain, who comes from a country where all children are born genderless and only decide on their gender when they become adults. While I cannot comment on whether the portrayal of Jerico was written accurately (I would recommend seeking out a review which explores this in-depth), for me personally it provided valuable insight into the LGBTQ+ community. Most dystopian series' also tend to forego mentioning what goes on outside of the country the story is set, yet here Shusterman has taken the extra step to challenge Goddard and his bigotry by introducing us to scythes all over the world and how they deal with his obtrusive ignorance.

Overall, this was a satisfying conclusion that once again is bound to shock audiences with its snappy plot twists and villains that don't hold back.

To celebrate the release of the book, I designed my Scythe Robes and chose Sansa Stark as my Patron Historic because although she's obviously not a Scythe but a Queen of Winterfell, she's a badass bitch and I want her aura.