The Best YA Friendships

Throughout our lives we encounter various types of people that we acquaint ourselves with, who sometimes even define our own selves, whether good or bad. Yet a lot of literature tends to focus on romantic relationships at the expense of overlooking those meaningful platonic friendships. For today's post, we are celebrating the release of Rayne and Delilah's Midnight Matinee by Jeff Zentner, which features two best friends and so there was no better time for me to share my favorite friendships in books.

Before I dive into my list, if you are in the market for a new laugh out loud Young Adult book, make sure to add Rayne and Delilah's Midnight Matinee to your to be read lists! Scroll down to the bottom of the post for a special guest feature from Jeff Zentner himself as he explains why the Top Gun movie is erm...bad.

Josie and Delia are best friends and co-hosts of their own public access show, Midnite Matinee. They dress as vampires Rayne and Delilah, perform daft skits involving skeleton raves and dog weddings, and show the so-bad-it's-good low budget horror movie. But the end of senior year is coming, and Josie is torn between pursuing her television dreams in a new city or staying making TV with her BFF.

Meanwhile, Delia is searching for her dad, who walked out on her and her mom ten years ago. When the private investigator she hired unearths his contact details, she agonises over digging up the past.

A road trip to ShiverCon, a convention for horror filmakers, may just have the answers the two need - but will Josie and Delia be prepared for life taking some seriously unexpected plot twists? 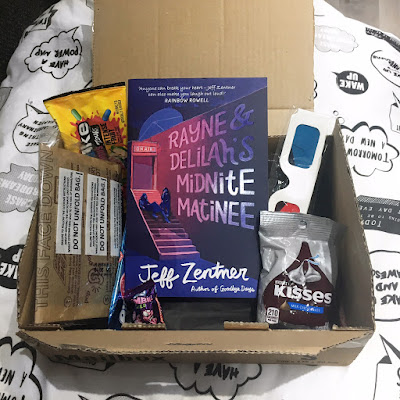 Thank you to Andersen Press for gifting me this care package,
ideal for watching horror movies at night alone!


A key aspect that I enjoy from the Shadowhunter Chronicles is the idea of having a parabatai (two Shadowhunter warriors that share an angelic bond) as it perfectly captures how non-related people can become family. I am so overcome with emotion every time there is a scene with Jace and Alec in any Shadowhunters novel as you can genuinely feel their connection coming off the page, there is never a doubt that they would be willing to die for each other, even when they disagree.

Millie and Sophie, Blood for Blood trilogy by Catherine Doyle


This whole article was inspired by the friendship between these two characters, as thus far I have yet to encounter a more perfectly written relationship between two friends than this one. Quite often in literature, the main protagonist gets so caught up in the plot of the story and any new characters that enter their lives that they dismiss any previous relationships. On the contrary in this series, Millie remains integral to Sophie’s life and they are a very inspiring representation of true friendship. Catherine Doyle manages to maintain their bond, despite a very action packed and dangerous plotline (this is a criminal underworld series, enough said), and showcase a very positive relationship.

Kenji and Juliette, Shatter Me series by Tahereh Mafi


If you have read the Shatter Me series then Kenji is most likely at the top of your most loved characters’ list, but it is his friendship with Juliette that makes him so unique in Young Adult literature. I am of the opinion that YA isn’t representative enough of platonic friendships between girls and guys and it is rare for a friendship to not develop into a romantic relationship. Kenji and Juliette are a perfect example how women and men can function as just friends and great ones at that! Tahereh Mafi manages to capture us with their dialogue, it’s witty and their constant banter feels so real and genuine.


A list isn’t complete without a sneaky mention of Hogwarts. Harry and Ron have one of the best friendships in literature purely for it’s realistic properties. Throughout the series, the two frequently have disagreements and even fall out during Goblet of Fire and the Deathly Hallows and it is common for even best friends to have disagreements and this is important to represent in books as it reflects everyday life.

When I was in sixth grade, the only song I liked was “Danger Zone” by Kenny Loggins. My sixth grade girlfriend dedicated it to me at the roller skating rink once. I thought my heart was going to pound out of my chest. I loved this movie so much. There was nothing I wanted more than to become a pilot and fly an F-14. But even then my eyes were so terrible, it was a vain dream. In fact, this might have been the first time I realized that some dreams are destined to rot on the vine—knowledge that would later come in handy.

Last year, I was on a plane (!) and the woman in front of my was watching Top Gun on the headrest monitor in front of her, and I surreptitiously watched the entire movie, without sound. Didn’t need it. I didn’t miss a single line of dialogue. And I realized something: Top Gun is a bad movie. It’s pure Reagan-era, rah rah jingoism. A two-hour United States Navy recruitment ad. A universe where America is under near-constant attack from unspecified other countries, and our only bulwark is a rambunctious group of womanizing, colorfully nicknamed, sometimes cowboy-hat-bedecked, sometimes mustachioed naval aviators flying the F-14 Tomcat. I loved the F-14 Tomcat. Sometimes I wonder what piece of weaponry young American boys now worship. Predator drones? NSA wiretaps?

On this rewatch, though, a scene jumped out at me and gripped me with particular force. Something that had never occurred to me as a child. Something that brought a cold sweat to my brow and palms. Was it that it occurred to me for the first time, as an adult, how I cheered the deaths of other men doing nothing worse than serving their own countries? Was it that the fire of patriotism had died in my breast in light of America’s transgressions of the last 15 years—the Iraq War; Abu Ghraib; George W. Bush; Donald Trump?

No. It was that in the beach volleyball scene, Maverick realizes he’s late for his booty call with Professor Hottie McDogfight, and so after having played beach volleyball shirtless, in dad jeans, he throws a clean white t-shirt onto his sweat and sand-encrusted torso and sets off...without showering. I have never been more stressed out watching a film. I was biting on my fist trying not to start screaming and force the plane to make an emergency landing. I don’t know what was going on in 11-year-old me’s head that I was okay with that scene. I hope Professor McDogfight wanted to hook up with a 5’4” tall, onion-scented emery board that night, because that’s what she was in for.