What went wrong with the Crimes of Grindelwald 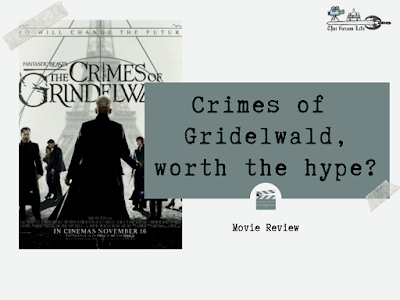 As an avid Wizarding World fanatic and serial viewer of all the existing movies from the universe, I downright had the release date of Crimes of Grindelwald written in blood in my diary. But not really because that would probably get me put onto some kind of FBI watch list and then I'd end up the inspiration for an episode of Criminal Minds. I used a regular pen my fellow wizards I promise. Leaving the movie theater however I felt...deflated? I was already having emotional palpatations in the middle because as much as I engaged with some individual scenes, they made no sense together, and I was skeptical of how the story can pick up. But don't get me wrong, I was not short of fangirl reactions to nearly all the plot twists.

Lets start with the bad shall we because I have some things to get off my chest. This was most definitely the slowest movie in the franchise to date. For a series that has a confirmed five movie deal, there was absolutely no reason to introduce us to a dozen new characters while also attempting to develop individual arcs IN A SEQUEL. The truth of the matter is that nothing substantial happens for the first hour and a half. Sure we get new characters thrown in and there is a ton of entertainment value in the appearances of the beasts but I was struggling to follow the snappy editing. Scenes felt incomplete, almost as though dialogue was cut off. The full cut would have surely justified the use of this many sub-plots.

Without a doubt had this been written as a novel where there was lee-way for having a very large page count, the plot wouldn't feel this scattered. Something that makes Rowling's writing so immersive are the detailing and character development, which makes me question how much of the script had to be cut out to fit into a two hour movie.

The inconsistencies with the timeline unnerved me as they came across as careless writing, I mean what in the hell was McGonagall doing working at Hogwarts as an adult when she wasn't even meant to be alive. Her birthday is in 1935. Nice of her to show up being -8 years of age. I would have been willing to overlook this, had she had an actual significance to the plot but her scene was 0.2 seconds long, come on now.

Despite all that however, this is still a film worth seeing if you revel in all things magic as the cast gave very convincing performances, in particular Ezra Miller who I felt was actually underused for the supposed importance he brings to the story but gave a hauntingly captivating aura to Credence.
Someone that I didn't anticipate in standing out was also Zoë Kravitz. In the first Fantastic Beasts movie, I was most intrigued by who Leta Lestrange was, so to get a full character arc about her was a good call from the producers. The Lestrange family back story was one of the standout moments in the original Potter books and so seeing the parallels in this timeline was a true treat.

Hogwarts was a godsend and upon first seeing the castle on the screen, there was an obvious feeling of nostalgia from the audience. Its grounds are still the most beautiful set from the Wizarding World and so it would be a wasted opportunity to abstain from showing us the rest of the magical schools from the franchise. I have high hopes for seeing Durmstrang, the school attended by Grindelwald, as ever since hearing about it in Goblet of Fire, I've been craving seeing it on the screen. I can only imagine its Death Eater party aesthetic being visualised.

Also I ship Newt with Leta and that's a hill I'm willing to die on.

For my overall thoughts on particular scenes and actor portrayals I had to whip out my camera and film a video. I had a very 'enthusiastic' reaction to everything so if you have seen the movie (or are not affected by spoilers) you can check out my review below, where I cosplayed as a Slytherin witch and discussed everything I loved!