My descend into reviewing adult books as well as Young Adult is off to a terrific start. At first I was sceptical as I am so well accustomed to a particular type of protagonist from primarily reading from the perspective of younger characters. Yet as a law student, the genre of adult books that have always intrigued me are legal thrillers and so today I am here to prove just how much you'll need William McIntyre's books in your life by discussing The Last Will, his latest release. 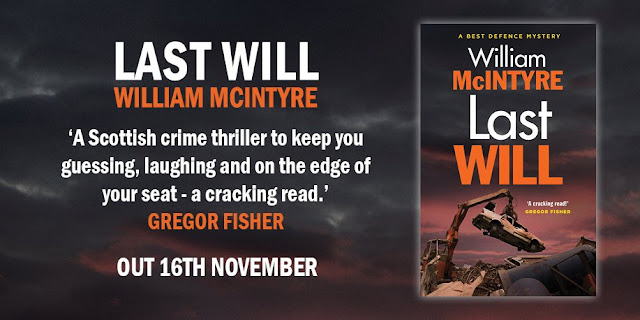 Robbie has a choice: look after his daughter or look after his client. Can the two be combined to give the best of both worlds? Robbie aims to find out, and his attempts lead him into the alien worlds of high fashion, drug-dealing and civil-litigation. It’s what being a father/lawyer is all about. Isn’t it?

Blood is thicker than water - but it’s not as hard as cash. The trial of Robbie Munro’s life: one month to prove he’s fit to be a father. No problem. Apart, that is, from the small matter of a double-murder in which Robbie’s landlord, Jake Turpie, is implicated. Psycho-Jake demands Robbie’s undivided attention and is prepared to throw money at the defence - along with some decidedly dodgy evidence.

Robbie's character was primarily the reason why I rated this novel 5 stars. He's a great protagonist to look up to, from his wit and constant determination to be a good father to his daughter while dealing with a high profile criminal case simultaneously. Upon hearing the premise I was most skeptical of the family law element in the story, but it was the perfect plot to run alongside the various homicides and action packed sequences. It broke the heavy tension of chasing down witnesses and discovering scandals and revenge hungry supporting characters.

The thriller part of the novel is never forgotten, with constant twists that highlight just how dangerous and high the stakes are. Despite being a barrister, Robbie comes across as a really exciting detective as he is trying to get to the bottom of what exactly went down that fateful night by getting involved with huge criminal underworld corporations and even fashion houses.


McIntyre is a mastermind when it comes to supporting characters and I was so heavily invested in their parts of the story. Robbie's brother is an ex-football star which upon first hearing this detail one would assume he would have no part in a legal thriller, yet his constant banter and occasional helping hand, bring a lighter tone to the novel.

The way the case was resolved metaphorically floored me, it was intricate and completely out of the blue. Just when you think you've figured it out, it turns the other way so this book should definitely be next on your to be read list.