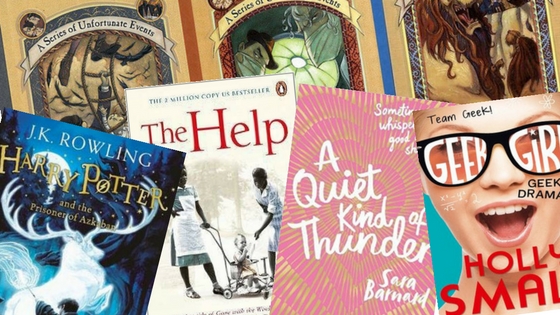 Welcome to Part 2 of my Inspirational Charcaters round up. Thus far we have had brilliant choices (check out Part One here), and so today I hand you over to even more of my blogger friends to share their favourites.


"I feel like every time I`m asked this sort of question, I talk about Harriet. I should probably be worried about repeating myself, but the truth is that I love her so much I don`t care. Harriet inspires me because she`s not ashamed of being clever (something I struggle with), she stands up for what`s right and what she believes in but isn`t some kind of saint, and she always makes her mistakes right in the end. Harriet will always inspire me every time I reread this series (which I do more than I care to admit), and I doubt I`ll ever stop talking about her"

Steffi - A Quiet Kind of Thunder by Sarah Barard

"I have a whole host of fictional characters I look to for inspiration, and one of these is Steffi from Sara Barnard’s A Quiet Kind of Thunder. Steffi has the kind of bravery that often gets overlooked. She doesn’t slay monsters or lead armies: instead she fights an invisible battle against social anxiety every day. Bravery isn’t about being fearless: it’s about facing your fears. I can’t think of a better example of this than Steffi"

"My favourite character has always been Sirius Black. I know, I know, he was awful to Snape and Kreature, I won't deny it. It doesn't make him any less of an inspiration though. He stood up for what he believed/knew was right, made his own family and was fiercely loyal to them. When it really mattered, he was there, even when he probably shouldn't have been or it involved breaking and entering. But, more than anything, he was a really good friend to Remus and treated him like a person, when most people shunned him"

Violet Baudelaire - A Series of Unfortunate Events by Lemony Snicket

"I adore Violet. As a kid reading these books, she always struck me as the strongest character within the pages. Fiercely loyal, determined, and never one to back down from a challenge, Violet was a hero from the get go. Growing up, it was so inspiring to know that a girl in a book was an inventor rather than a wispy damsel in distress; Violet knew exactly what to do in a situation and knew how to fix it just by looking at the objects around her. With just a simple action of tying back her hair, Violet reassured me as a reader that she would be ready for anything"

Skeeter - The Help by Kathryn Stockett


"Skeeter stands against racism in 1960s Mississippi, fighting for freedom of speech, opposing the attitudes and opinions of her friends and family without fear of rejection and empowering an entire community. That Skeeter aspires to be a writer in a time and place where women are expected to tend house and raise children only further endears her to me. Her gentle refusal to conform is refreshing, she reminds me that the actions of one person can make a difference"