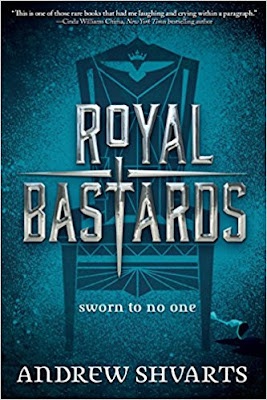 Royal Bastards follows a bastard born Tilla, who finds herself witnessing a brutal crime for which, along with her companions, she is accused of. This unforeseeable event forces her to go on the run with her brother, best friend, the visiting princess and a ruthless Zitochi warrior. As rebellion and civil war begin to brew, it is up to them to warn the King, but first they have to survive the journey. With magic and dangerous beasts on every corner, this is a new fantasy series that is bound to enchant you.


Upon hearing this premise I didn't have to think twice about reading it, it simply had to happen. I have somewhat of an *obsessive* history with bastards, as the concept of illegitimate children of royals is so damn intriguing. Jon Snow and Bash from Reign, need I say more?

The world building is incredible, I felt as though I was reading a future installment of an already established setting, let alone a debut book. A lot of fantasy books fall victim to overbearing explanations and too much world building. Yet, instead of endless pages of 'information dumping' as I like to call it, we learn snippets throughout the book and only begin to fully understand it by the end, keeping the mystery throughout.

At the start of the story we meet an array of very dynamic characters, whom all add to the edgy feel of the novel and I was most impressed by the way they were all developed. The contrasting personalities of each member of the gang also allows you to find someone to relate to throughout the story. All these characters have incredibly intricate back stories, trust me when I tell you will be floored. The first impressions of each character are so deceitful!


A key point that will make you devour this book is that it's hilarious. It being a fantasy, I wasn't expecting so much banter! The amount of friendly shade being thrown totally enthralled me as being fluent in sass myself, I was having the best time. I mean, Jax actually says to Zell "You basically don't have emotions between 'gotta kill' and 'yay, I killed'. HOW does that not make you spit out your coffee?!

What I appreciated the most was how progressive the plot was. Most of the characters have only just met, meaning they are unsure as to  how to act around each other or whether they can even be trusted after being forced to stick together. This comes across really well as you begin to notice their familiarity with each other increase. It is a common book trope for characters to instantly act as thought they have been drinking buddies for the past fifty years, there is none of that nonsense in Royal Bastards.

As a final point I'd like to mention the feels that will ultimately break your soul in half and send it down to hell for processing. As insane as this sounds, I became so attached to all these characters that all the plot twists and betrayals completely unhinged me. It is definitely an adventure novel as the plot focuses heavily on getting a message to the king, meaning we encounter gruesome monsters and foreign villages, the action never ends!

I cannot recommend this book enough, make sure to add it to your tbr pile and buy it here, Book Depository have free delivery.