All Fall Down by Ally Carter Review 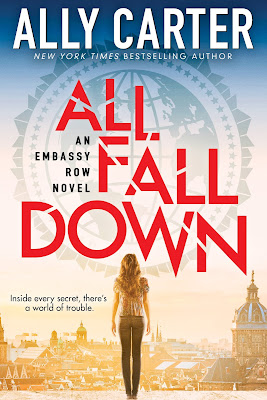 All Fall Down follows Grace who has spent the last three years trying to persuade everyone around her that her mother's death had been a murder. They all believe she's crazy and moving to Adria to live at the US Embassy with her grandfather was set to be a fresh start. Not all goes according to plan however, as Grace begins to relive the tragic night by being certain that her mother's murderer has come back and is set to kill again.


The most interesting aspect of this book was definitely the setting of the plot.  A single road made up of embassies, each representing a different nation allows us to hear from a wide array of characters from different nationalities, which is a very smart way to have a very diverse read without leaving the small country of Adria. There was a key focus on democratic relations and so we got an insight into how severe the consequences could be from a mere accident at a neighboring embassy!

The ending FLOORED ME. It was so well thought out and unexpected that I stared at the page for a while contemplating whether I read it right. This definitely had a darker tone to it that any of Ally Carter's other books; you can feel just how affected and haunted Grace is by the events from that fateful night. While it took a while for me to get completely invested in the story, I would read it all again just for that bombshell at the end.

One of the reasons that I love Ally Carter's writing is because she always manages to prove how smart and resourceful young adults/teenagers can be. In All Fall Down the characters all bring a different skill to the situation at hand, everything from tailing strangers to hacking into government websites! There was a real feel of a mystery being solved, while at the same time uncovering secrets that Grace didn't know she  needed to know, so the plot kept you guessing continuously.

Now let me explain my rating. My only issue with this book was the slight frustration I felt with the way Grace dealt with trying to prove to everyone that the scarred man isn't just part of her imagination. While I do appreciate that this was mainly due to her experiences with dealing with her mothers death, at times it didn't feel realistic and some events were slightly out of the blue, which distracted me from the story.

Overall, I would highly recommend this to mystery readers as there are great twists plotted throughout and the characters are all so witty and likable that I had a great time reading this.