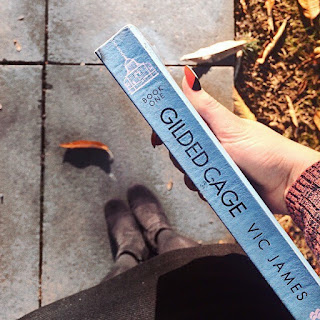 Gilded Cage is set in a world run by magically enhanced aristocrats, known as Equals, and where every citizen of Britain has to complete 10 years of 'Slavedays'. During this time you lose all your rights as a human and get given a job to fulfill for an entire decade. The plot follows a family that decide to do their Slavedays together but not all goes according to plan as they get split up, with one of them going to the most harshest labour camp. The rest get sent to work on the estate owned by the Equals, where they experience a very different life to that of their son.

This book is a perfect blend of two genres that do not often get paired together, fantasy and dystopian. I would also go as far as to say that it is a suspense novel due to the numerous plot twists that keep the plot engaging and addictive. What makes this a very unique dystopian is the fact that futuristic worlds are often created with a complete disregard for normalcy, especially when it comes to everyday practices such as hobbies that characters enjoy doing. James seems to keep reminding the reader that albeit this is a different world, the characters are not robots without personalities as small reminders of them talking about music or literature, make them relateable and real.

In regards to the writing style, I often struggle with reading from multiple points of view, yet this book hits the jackpot by making each characters' perspective different from the others and you can clearly distinguish between all the chapters, which is rare *cough cough Allegiant*. I originally thought this many points of view (there are 7!) would discourage me but on the contrary, it felt like watching episodes of a TV show, filled with cliffhangers, which were answered later on in the story and this gave me time to process plot twists, which had me floored each time.

This is a highly character driven book and each has a very well developed back story, which is surprising given that this is not a long book at all. Their clashing personalities add a lot of excitement to the plot and so there was never a dull moment, especially when dealing with the Estate, which was my favorite setting. The most interesting characters were the Jardines, the Equal family we follow throughout the story, in particular the three sons of a very power hungry noble. They are very intricate people that repel stereotypes, as I find normally with stories such as this, they would be expected to be disagreeing with their harsh father and following a common book trope that they are good people deep down. This is pleasantly not the case, as even when appearing to be showing a softer side there is always an ulterior motive, it keeps you guessing till the end.

Throughout the story the main aim is to resolve a controversial proposal that is brought up in Parliament so there is a political aspect to this urban fantasy, which means it isn't overwhelmed by romance, quite rare for a Young Adult book. Essentially, James runs away from cliches and does the opposite by engaging the reader with themes other than stereotypical love triangles. Romance is used as a tiny (yet addictive) backdrop to the plot.

If you are looking for a completely feels worthy, unforgettable story that plays host to an intriguing cast of characters, then Gilded Cage is a must read.

No doubt a five star book.

Check out my spoiler review of it below, if you've read it and wish to discuss!